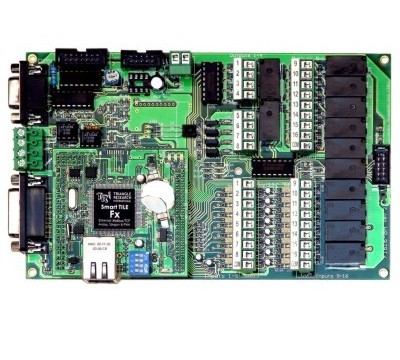 The Fx1616-BA is the ideal choice for "Smart Buildings", to provide creature comfort for its occupants, or to monitor and control the energy consumption in buildings and homes to eliminate waste, and thereby helping to achieve the Green Revolution! Best of all, you get a FREE Web HMI to go with this Super PLC!

Starting with the control I/Os, the Fx1616-BA has built-in 32 digital I/Os (expandable to 256) that interface directly to 24VAC or DC power, 8 analog inputs and 4 analog outputs that are 0 to 10V range. Among the I/Os are 4 DC outputs that can also be used as PWM or AC phase control (light dimmer type) outputs, or to drive stepper motor(s). Also, there are 3 high-speed encoder inputs, 6 incoming pulse frequency counter inputs, as well as a built-in Infrared remote control interface. Unlike other product makes, these incredible features come in the standard package at no additional cost to the buyer/user.

More importantly, the Fx1616-BA's immense communication capability allows it to be used either as the master controller of a simple project such as in home automation, or as one of hundreds of "node controllers" in a complex buildng project. The built-in Ethernet port on the Fx1616-BA PLC hosts both a PLC web server and a Modbus/TCP server, allowing up to 6 simultaneous connections with devices such as touch panel HMIs), hardware running SCADA and PC software or other node controllers. The controller is also able to send out emails, create a report on its file system and upload to an FTP server, or check a specified website to retrieve dynamic contents. More standard interfaces on the PLC include one RS232 port and two RS485 ports, all of which support industry standard MODBUS RTU or ASCII protocols. A special set of interface pins is even provided on the PLC to allow addition of a third-party radio module known as XBEE which in turn enables this controller to interface to futuristic ZIGBEE wireless sensors and control modules.

Just as notable is Triangle Research's proven i-TRiLOGI "Ladder+BASIC" programming software which makes complex programming of the F-Series PLCs a whole lot easier than with standard ladder-logic programming! By combining the Ladder Logic program with a floating-point math-capable BASIC langugage (i-TRiLOGI version 7), this great controller is packaged to be ready immediately to interface to power meters, HVAC sensors, and/or talk to other other controllers to carry out sophisticated control tasks in a commercial building project.